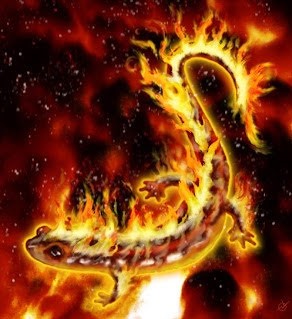 My heart was pounding hard the ribs’ cage when I arrived at the village where I was moving. It was late in the night and I could feel powerfully the energetic imprint of the Dark Divine. I felt the back extension of Anahata pulsing and my black wings were about to unfold.
Lord Belial informed me beforehand I will be protected as well as will be the house. I was keeping reciting His enn on the way there: Lirach Tasa Vefa Velich Belial.
In the first few nights every single time I woke up I felt the presence of the powerful demon around. Like He was keeping an eye on me. The energy of the house was very clean and in the first morning I started to ask myself about who can be the spirits of the house and what offering should I make to them. Then Lord Belial told me they are from His Legions. “You’ll see”, He said.

At the New Moon I called forth Goddess Hecate to assist me at a destruction ritual – I burned everything what did not serve me anymore, including some books form my abrahamic path. I kept opening the stove door then all of a sudden I saw a spirit though camera lens. He looked like a man, just small, well-built, bearded, with breastplates and with a spear. Eyes were dark. There wasn’t even a shadow of smile on his face. He looked like he guarded the fire. I knew right away he was a a fire elemental. Also I freaked out. He realized I saw him and got scared, so he disappeared. Since I moved in the house, I light the fire very easy every day and feel his presence like a protective spirit. The wood in the stove lasts really long. The energy of the house is as I said, very clean. So I dared to ask some questions. He told me he was sent by my Patron to whose legions he belonged. Also he confirmed he was a fire elemental. He told me he lives in fire and had the power over it but was not made from fire. Actually he doesn’t have a body at all. He is a pure spirit. The Salamander instructed me to keep the stove clean, without crumbs and stains as it is the place where he lives. Also teach me how to light the fire easy and to change my way of clothing so I stay warm even outside without being dressed too heavy. I cleaned the stove very well and my room and made an offering to him – some dried herbs, turmeric and olive oil. He asked for frankincense next day, which I did. He like mint and sage as well. I tried to offer him abit of banana and a strawberry but he told me eat them myself. “It would be like I’d give you some Uranium, so you don’t miss the experience of having an Uranium meal. 🙂
After a wile, he gained trust in me also was assured I won’t freak out and showed the real shape, as a beautiful salamander with ruby eyes and a wavy strong body in the color of white ashes with abit of dark ruby and black. He is unhumanly beautiful and powerful and looks at me from the stove with deep piercing eyes. He also told me that there are many salamanders and showed me some who are small and all black and leave in the Earth, helping and taking care of any fermentation processes as well as of sprouting seeds and growing of the plants. Also there can be female or male salamanders. Mine is a male. One time the Salamander light the fire in the stove by himself (without me doing anything) so I know it was a friendly sign from my Patron demon. It was like I was outside doing some work around the house (as I had to) and when returned inside fire was burning in the stove and it was all warm and good in the room. Here are some pictures of the offering to my new friend.

I cannot sell my soul to the devil for I dedicated it all to Lucifer. View all posts by aripidenoapte

1 thought on “The Salamander in my stove”